The TIGER SUP race fin is designed for increased speed, enhanced tracking and faster buoy turns especially on flat water. The Tiger is highly recommended for medium to long distance racing on flat water as well as technical races with lots of buoy turns. The Tiger SUP race fin is best suited for advanced to professional stand up paddlers with a medium to high cadence. Built in our ultralight Pro Carbon construction our fins are the lightest sup race fins available.

The Tiger SUP race foil offers surprisingly large amounts of grip when at speed given its 20cm (7.87 in.) length and small 216cm² (33.5 in²) area however when you initiate your buoy turn the fin is designed to change the behavior of the board significantly enabling you to get much tighter transition. The foil has some special properties which optimize the turning ability at low speeds just when you need it but increasing the grip as the speed increases on the straights so that you can deliver more power through your paddle.

The Tiger SUP race fin will increase your raceboard’s top-end speed while helping it to turn on a dime. Many races are won and lost at the buoys, the Tiger will enable you to attack each turn and turn it into a race winning opportunity. We worked with our global team of elite athletes to develop the Tiger SUP Race fin to fit their needs while racing in a range of conditions all over the globe. Riders of the Tiger SUP race fin will enjoy higher average speed, faster peak speed and tighter technical buoy turns. The fin will get you round the course more efficiently while helping you to leave less overtaking opportunities for your competitors. Racing is about getting from A to B as quickly as possible with the caveat that in technical races with lots of turning that becomes A to B to C to D etc.

Our Pro Carbon construction uses RTM molding technology to produce the lightest fin possible at only 150 grams (5.29 ounces) while maintaining excellent stiffness and strength. Our Pro Carbon technology is so light that our fins float freely in water. 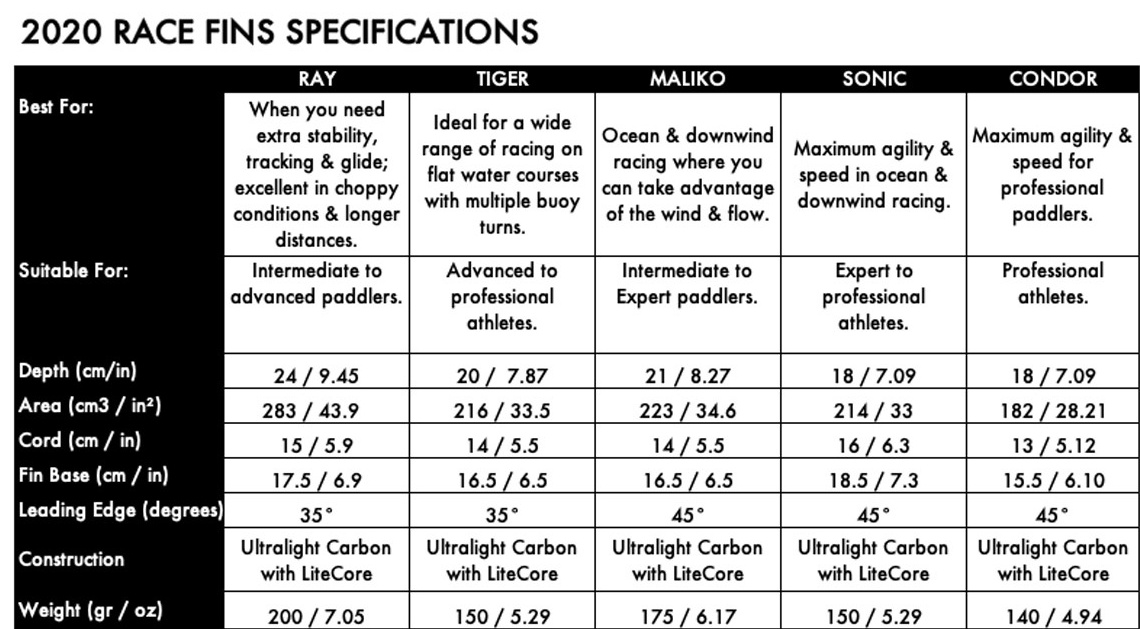